At the beginning of the twentieth century eleven men signed a petition and sent it to the leaders of the Northwest District of the Lutheran Church – Missouri Synod asking them to establish a church in Sandy. The District called the Rev. H. H. Koppelmann who was installed as pastor in Sandy in August 1901. The first church building was started with $57 in pledges and was built on land donated by Mr Junker, owner of the Sandy Hotel. The first worship service in the new church was held Christmas Eve 1902. The original building still stands on Pioneer Street in the middle of Sandy. In 1907 Immanuel Lutheran Church was formally organized.

Immanuel’s first pastors served preaching stations in the vicinity of Sandy. They would spend several days walking over uncertain forest trails to neighboring locations including Damascus, Dover, George, and Estacada. By 1913 the roads and economic conditions had improved enough that Immanuel’s second pastor, the Rev. F. Dobberfuhl, was able to buy a car and travel more quickly to the mission locations.

Immanuel Elementary School was started in 1904. Classes were held in the church until 1912 when the school building was completed. In 1907 only seven children attended the school, but over the years the school flourished. In the 1947-1948 school year about 50 students were enrolled. Immanuel Lutheran School conducted classes until 1955.

In 1956, ground was broken for a new church building on Pleasant Street at the east end of Sandy. Members of the congregation and the community did much of the work, from cutting timber and sawing lumber to installing windows and woodwork in the church. Immanuel's present church building, was dedicated in 1959. 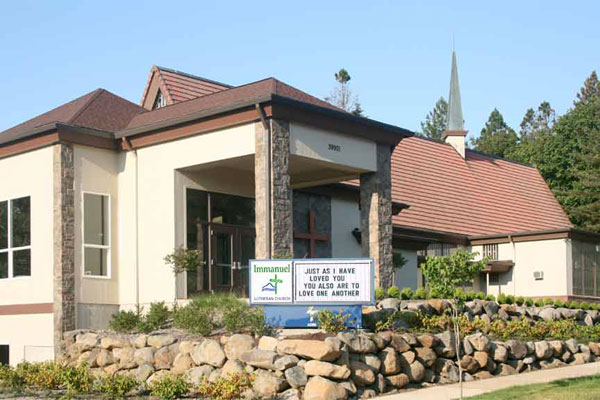 Immanuel celebrated the 100th anniversary of its founding in 2002. In 2008 the congregation dedicated the addition pictured in the photo on the right which added a large entryway, additional restrooms, an elevator, three meeting rooms, fully paved parking, sidewalks and landscaping.